When it comes to airguns, choosing the right ammo can have a significant impact on your device’s accuracy and its overall power. There are different types and functionalities of these ammos. In the next section, we’ll take a look at the various options available in the market. 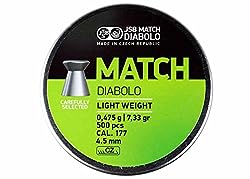 This is the most conventional choice for target shooting. Usually, Wadcutter pellets come with broad, rounded heads that can cut huge holes in the paper targets. These targets are excellent for plinking and similar other competitive events. Some hunters feel that wadcutters work better on the smaller games when compared to pointed/domed pellets. However, there isn’t any veritable evidence to prove the same. These pellets don’t over penetrate, and usually work like a cheaper grade of hollow point. When you’re using a wadcutter pellet, you have to understand that they tend to drop faster than many other pellets. So if you’re looking to make shots that are further than what you’ve calibrated, you’ll have to adjust. 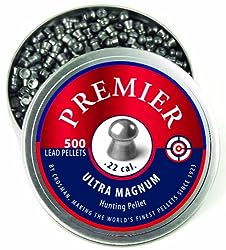 These are the most aerodynamic pellets you’ll ever find. To put it simply: they hit hard at relatively long distances. Domed pellets were designed after air guns started becoming more powerful and after the conventional wadcutters started losing its accuracy (due to resistance from the wind). These pellets usually come with a heavier tip that automatically generates significant knock-down power when compared to the other pellets. 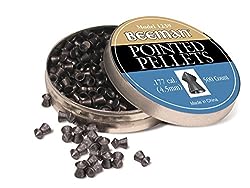 As evident from the name, these pellets are specifically designed to penetrate the target. Pointed pellets are an excellent choice for medium range varmints as they penetrate through the thicker hides and hair. Although they come with the same aerodynamic properties as the domed pellets, they aren’t as pronounced as you’d want them to be. These pellets tend to retain better velocity than the wadcutters due to which they shoot flatter and penetrate at a proper range. 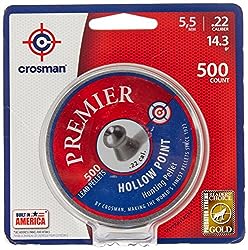 Originally designed for the rapid expansion games, Hollowpoint is specifically a hunting pellet. When you fire it from a powerful airgun, this pellet will expand to cause the biggest damage. Although the accuracy tends to drop after 25 yards, you wouldn’t want to use it for plinking. 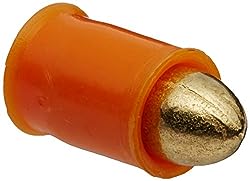 Available in various shapes, these pellets are specifically built for speed. Certain powerful airguns use this high-velocity pellet for reaching speeds of more than 1200 FPS. These pellets are usually made from lead-free alloys, which further foster their speed.

Certain heavy duty airguns are built for firing modified bullets. They tend to bigger, heavier and a better aerodynamic profile. Owing to these properties, these bullets are only used in high-velocity, good caliber rifles. Although you might find .22 caliber bullets, the usual variants tend to be .357 and bigger.Hunters use bullets instead of pellets, where it is legal to hunt deer with super strong airguns.

The kind of ammo you’ll choose depends on your purpose. So, explore your options and choose the one which best meets your purpose.